skip to main | skip to sidebar

we venerated the One

worshiped trees, saints, and demons
ghosts, ancestors, the sun
we pleaded to the stars
"take us to where you are"
we lay down on the Earth
chest, belly, face-first
we went everywhere
a seeker could go
across the country, across the ocean
in wind and storm and snow
finally we gave up
the truth too hard to find
an answer arose
so quietly, kindly
arose from inside
Posted by Marc at 3:46 PM No comments:

tear up your livelihood

from the roots, the money tree you watered

with scraped nickels and dimes

the storms and the aftermath

the incessant building and leveling

are enough to take you through

I don’t know how it all began

A flash of lightning in pond-pocked lands

In an ocean floating like a child in a womb

Biomolecules woven on a nucleotide loom

Maybe there is nothing magical mystical or holy

Undone when it is done, in a future no one is controlling

And the Universe will leave no trail of love, hate, no mist

No bones, no trace, no record written like this

But, maybe there is some cause, that itself is also its own

That sees what is seen as it knows what is known

All of this occurring in an instant the same

As consciousness is conscious, speech speaks its own name

And here is my belief, or hope or faith

Because that’s the way I roll

Raised without much notion of a God

I found It in a furious hole

Saw a light or a dark or rainbow, or a grey

Chased it all down through the years

I cannot prove it beyond my own heart

a world of spoken and subliminal messages

we sit in silence, where you can hear an awful lot

of what arises in the moment, unheeded by most

holy cow, a Universe in a dusty corner

of the ceiling of a dream, whispers all that may be

the past flows through the present to beyond

fields where we may meet or fail to

in futures uncertain that pale to

the woozily unstructured story of here and wow

all you have dreamed and been driven to do

free as the sky

become one and the same

the names of all things

and the thing without name

-- Sofie Stril-Rever, translator for the Dalai Lama
I feel it in my nerves
in my breath
the sense of touch
that links feeling of flesh
to feeling emotions
I am okay, and so I know
the world is too, somehow
"We are the world," it's been said
the song is you
touch that pen
let it feel the paper
watch as it writes
touches you, too
re-rights the world
infuses peace of heart
balance of just
source of light
stars, eyes, mind
one shared thought
it must
Posted by Marc at 11:38 AM No comments:

when it is the mother who is holding it

half conscious of this world

one inner eye straining back

peering into the world it came from

nothing was the same

no one was to blame

I must have been

the seal was broken

the vow, the bond

oxytocin, to be replaced

by glucose and orgasm

or an addict in a sober sky

something I cannot find

even after I find her,

beyond the bummer of all

that could go wrong,

a new kind of song

I shouldn't care, b/c

whoever else needed to be,

the cloister of breathing

I take refuge in now
dried leaves on sidewalk
dirt between cracks, a cigarette butt
I know its much more impossible for you
where there is no recourse
from the ugly words, the threats, the fists
between a rock
and a rock
and a leap of faith
that feels more like
a leap from a fifth-floor apartment
but take Her hand
that breathing might be
an oasis in the burning forest
believe me, soon
there will be ashes around you
grotesque, yes, but quiet
now-cathedral
future-glimmer
past, fuel and fertilizer
Posted by Marc at 9:36 AM No comments: 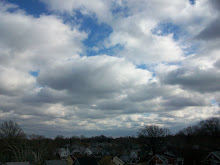 but ya need pics 'o clowds!

Marc
Cleveland, Ohio, United States
I am a peer support specialist -- mental health worker -- by trade, avid and slow reader and lover of music by avocation.